Ive been asked to start a thread about my Cosworth engine. Im aware this is not a Ford site & that it may be a big turn off to many.

Best start with the engine that will be replaced. It was Dynoed on the Norris Designs Dyno in December 2008 the aim was to produce a genuine 800bhp road engine. Big Power is easy just Big everything & a 1000bhp is available but one look at the curve of such engines show no Power below 6k & completely un drivable on the road. Great drag engine though. To this aim ports were kept at 600bhp levels & the exhaust cam also kept mild. To get the geometry right for high revs the rods are 8mm longer & the pin moved in the new short skirt pistons. We upped CR from 7.2 : 1 to a completely un heard of 8.5:1 apparently that could not work according to rivals but they seem to have changed there opinions about that. The Turbo selected was a GT4202 which we knew would puff the boost. The aim was to overcome the limitations of the ports/cams with high boost. Well it worked result 838bhp/666ft-lb @ 2.9bar & a curve to die for with 2008 technology. Heres the graph its good for back then & completely useable on the road. We also moved to 16v not 12v thus running fuel pumps & CDI ignition at higher volts it meant no 'spark blowout' at high boost even with large plug gaps.

This engine soldiered on for 6k miles & then in July 2011 it started to knock. A check found Cylinder 3 & 4 big end shells worn although no drop in oil pressure was seen. We had know when we built it that reving beyond 9k was not good for a wet sump engine & this proved it. In 2010 we entered a RR shootout it was great fun trying to hold that Power on a RR its increase in Power not the actual peak Power that proved difficult. Tyres were let down, then strapped as hard as possible & then pumped up to 40 psi & to get grip 5 guys inside the car. Heaven knows how much Power this was losing but the old girl did good. Beating a 7 litre V8 . 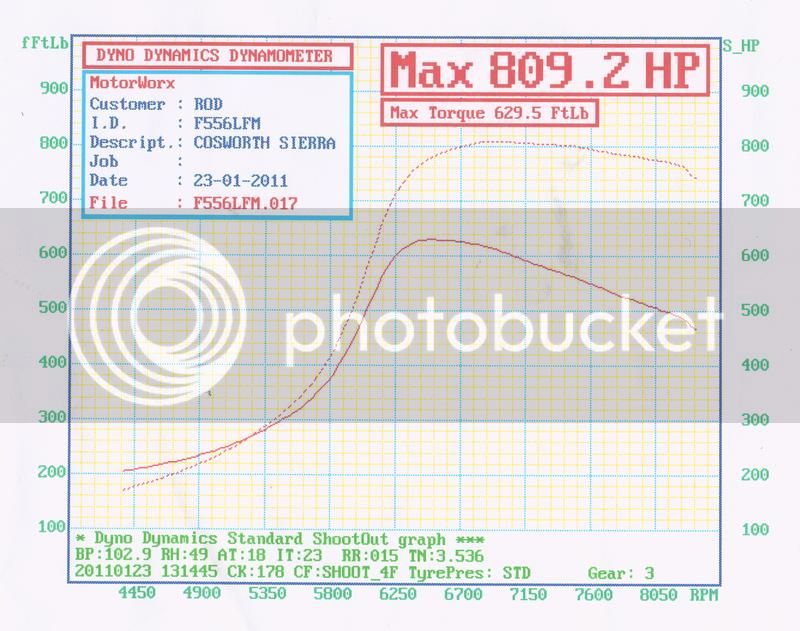 The new engine is start again. The Block has been further modified to supply oil to the rear of the block with a mod first used on WRC cars we should have done it on the last engine. Crank, Rods , pistons all new. The wet sump /breather system is replaced with a 4 stage dry sump sytem including a Turbo scavange. The head has .25mm bigger ports so still small & a 1 stage wilder exhaust cam is fitted. Valves remain standard. Its the battle to solve the YB vibration problems that have meant turning to aircraft tech. to try & solve. We have a front end rattle made for this engine & also real secret squirrel stuff with a ****** also used. Its a first time one off. To aid head gasket integrity I again turned to my pals in the Aircraft world knowing its light years ahead of your average Tuner. I sent a set of Mountune long studs to be analised. Mediocre at best built to a price. I asked what was possible a 100% increase in shear strength would cost £3500 for the stud set I didn't ask the price of the nuts. In the end I compromised at a 55% increase in shear strength for a mere £1000 with nuts at £23 each. Pushing boundaries is not a cheap game. Big progress has been made in ECU design so my old Autronics SM4 has been replaced by the latest Emtron KV8. The good old GT Turbo is now as dated as my taste in shirts & will be replaced by the mega quick spooling EFR 9180 my Tuner says the biggest advance in Turbo design ever. Its twin scrool so will sit on an Inconel manifold. The single RS500 Throttle body will be replaced by a set of Jenvey ITB'S.
Well that's the changes & should be ready by February 2016.
Fuel is also in a new era & we will use FTW Purple with the 9180 it will be out of puff circa 940bhp but spool about 800rpm sooner than the GT42.
I think that will be it but if the mood takes us we will take along the GT4202 & wind the Boost up. 1000bhp would require about 3.8 bar ish to reach but be risky & pointless.
Well that's it don't expect many to reach the bottom of that lot.
Click to expand...

I did and I understood some of it

Geez, you ain't messing about. Not following the herd is the only way to get in front of it. A man after my own heart but a league or two above but I am hoping for promotion next year

Please keep posting so at least I can keep abreast of progress.

This is great young Rod, absolutely marvellous stuff thank you

OG
Just remember your aims are different but just as difficult to obtain. Mine will never ever beat your Elan down the quarter & you may struggle to beat mine down a mile straight. BUT we both have aims to set new standards for the car we choose to work with. Ive followed your thread don't post much but your attention to detail & that dogged determination to build the best you can is much the same as me. I salute you Sir a kindred spirit.

a good turbo choice - the twin schroll EFRs are extremly good with very early spool for the power they produce.
same with the mainifold

Tnanks Rod, much appreciated that somone like you thinks that I am doing a good job.

According to my simulation software I should hit theoretical top speed (186mph) after 3200ft, so there is no chance over the mile

My turbo, although unused, is at least 8 years old so this may be something I should look into.

A twin scroll external gated EFR with a twin scroll manifold would completely transform your engine from the old GT Turbo spec engines they were Top of the class 10 years ago. Im sure I could get advice on the size to use if & when. You could use an internal gated version on your existing manifold a compromise but streets ahead of what you have.

Why has my thread not got any views or replies info

MADRod said:
A twin scroll external gated EFR with a twin scroll manifold would completely transform your engine from the old GT Turbo spec engines they were Top of the class 10 years ago. Im sure I could get advice on the size to use if & when. You could use an internal gated version on your existing manifold a compromise but streets ahead of what you have.
Click to expand...

Yes please! An internal gated version that fits my exsting 4wd manifold would be favourite

I have PM'd you the engine spec as it stands.

this is great to see im sure you will hit the targets you have set, i have followed this cars progress down the years via passionford and what you and mr shead have done i doubt will ever be done again, huge respect for you and the car

MADRod said:
Why has my thread not got any views or replies info

What do you mean? There are views and replies on here

For speed the views and replies stats on the main forum pages are only periodically updated. The forum would run really slow if they were all live stats.

Keep us updated, this is a very interesting thread to me and I'm not a Ford man at all! I love what you're achieving here and your methodology is a lesson to all.

iv just seen some cracking updates on this over on passionford, please get this thread updated rod as im sure people will like whats happening

Alongside the development of my YB Cosworth engine M.A.Developments is developing an EVO to the same Spec. A very excited Mark Shead rang me today with the news that the latest Mitsubishi EVO engine had made 931bhp/740ft-lb @ 3bar (43.5PSI) on 109 race fuel . The special FTW Purple fuel was not used because the Fuel Pump was maxed out. A Booster to 18.5v for the fuel pump will allow more flow so higher Boost & also FTW race fuel can be used. The FTW tends to make +5% over normal race fuel so you do the maths & with extra boost its looking exciting. In the past the YB has tended to equal & usually surpass what an EVO makes spec for spec. The new head gasket integrity mods also to be used on the YB worked with zero water loss a rare feat at this level of Power. We are talking low down Torque from these engine not the normal big BHP drag engines. Congrats Mark its taken 4 years 3 months to date, I could tell from his voice he was rather chuffed. Can we crack 1000bhp with the 9180 turbo, on Methanol that looks a cert but we really don't want to go down that route. My build will be ready end of November lets hope it will be worth all the hard work & money its cost.

Once the engine is back in place, what is the plan?

Funily enough got an e-mail from Craig at Vmax today hoping I will be there next year. That's an option but so is a 1 mile run we have enough Power to break existing record in that distance its a safer option for an oap & that has to be taken into account.

Where would the 1 mile run be, Brunters?

Could be at Woodbridge or Brunters. An event called Terminal Velocity runs Topspeed runs over 1mile & 1.25 miles at Woodbridge that's where the existing record was set. But if im up for it I owe the car a good run at Vmax amongst the Big Boys.
G

I'd love a Cossie. If my numbers ever come up, Moonstone RS500 please

There are quite a few people reading this thread looking at the stats but we've not had any updates from you in a while any updates on this project - how is it going?

I moved the rebuild of my car to Facebook about 18 months ago I guess. Facebook is much more Focused than Forums where only a small minority are interested in these Mega Powered cars. For anyone who still wants to know how the car is progressing it can be found here. https://www.facebook.com/fastestcosworth/?ref=bookmarks

I'm not on Facebook. Good luck with the car though. Something we can only aspire to. I take my hat of to you sir, your passion and dedication to this project is a fine example to others.
You must log in or register to reply here.
Similar threads