Ok listen up spanner throwers it's with a heavy heart that I'm selling my Nitro trucks. The fact is as much as I love 'em I bought them in a fit madness & they havn't been used in over 18 months & they're taking up space!
So the upshot is, someone is going to get a bargain!

Package is as follows...

One awsome Kyosho Gigacrusher Twin Force. It's the rare twin engined kit version that I had imported from France.

The spec...
Too much to list but the main is,
Twin .26 engines (total 4.3cc 5bhp)
3 speed transmission with reverse operated by 3rd channel
8 shocks
Massivly strong chassis
Powerful inboard disc brake (strong enough to flip the truck!)
In fact the full spec can be seen here...

The truck hasn't been run for very long the engines are run in & a little after that. I wanted something to build at the time & this fitted the bill. The rest of the time its sat at home collecting dust. The truck is funny fast & the sound it makes with both engines going & going up through th gears is nuts!
It goes without saying that it's not recommended to run this in the street, you need a good size space as it can cover a lot of ground it a very short space of time & would knock a small child clean off their feet! It's a hoot on BMX tracks though!

The truck is in good but slightly dusty condition, I broke the air filter mount on its first outing & fixed it with zip ties I do have a spare but I have never got round to fitting it.
The body was painted by me & the inside sealed with Nitro resistant paint, however it's got a couple of small cracks in some place where it's been stored & moved around.

The second truck is a much smaller but equally fast Schumacher Couger. I have fitted the optional two speed gear transmission & converted it run with the same Hitec Tx that's used with the Gigacrusher. Don't let the size fool you this truck is still capable of 40mph but can be used in smaller spaces than the monster above.
Again this probably hasn't been run for more many hours either!

I really must stop walking into model shops!

You get everything you need to run these two trucks incliding the following...

Hitec Eclipse Procar 3 channel transmitter (tx)
( the Giga crusher runs 3 hitorq Hitec servos & HIS 02MK programable reciever)
This Tx is fully programmable with a multi model memory. Full digitally adustable trims & stops including a rather cool ABS braking feature. There is a module in the back that can be swapped for other applications.
A programable Prolux Digicharge 104 battery charger that will charge just about anthing (Ni-cd, NiMH, Pb & Li-Po) & will work from mains & 12V.
3! glowstarters
New tyres for the Schumacher Rascal
Two Spare in line fuel filters for the Kyosho
New filter kit for the Kyosho
2 bottles of shock oil
1 bottle of engine lubricant (and a a drop of two into the engine it protect the cylinder & bore when not being used.
Various %'s of Nitro fuel
2 spare glow plugs
All the rechargable batterys packs required to run the recievers & servos.
In short everything you need!

Some pictures for you... 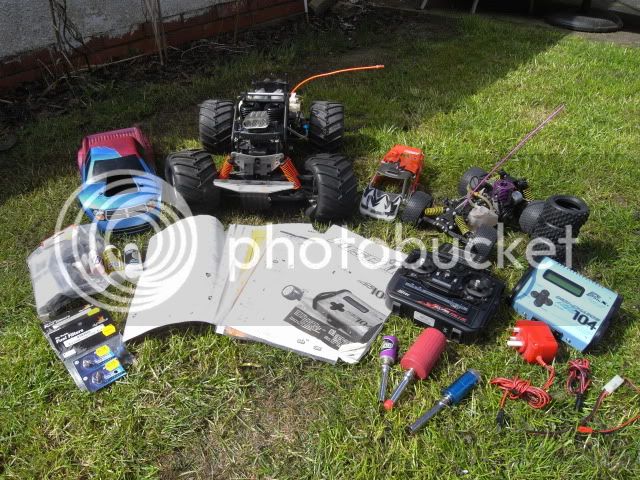 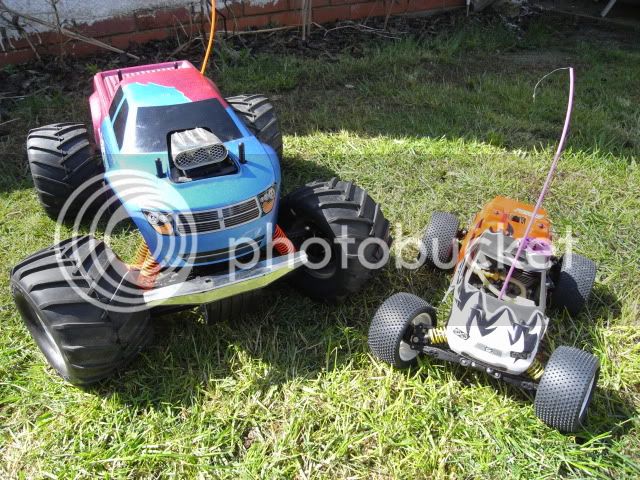 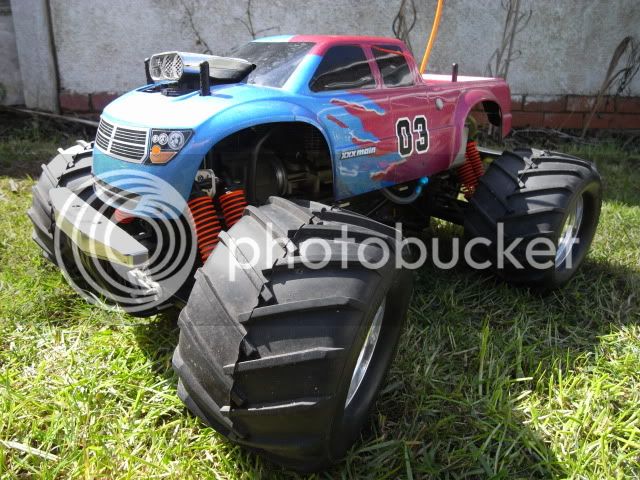 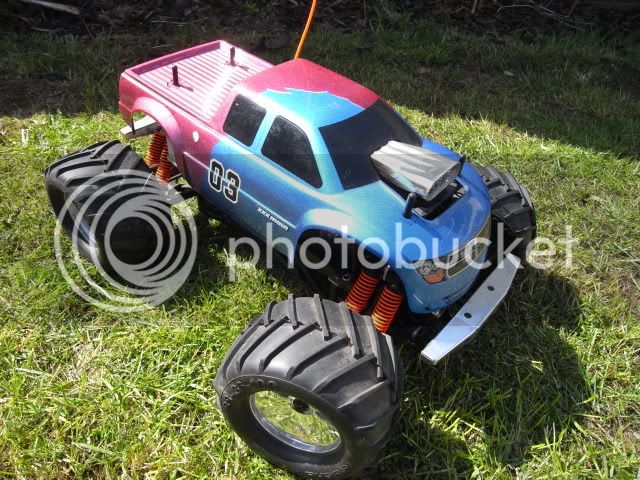 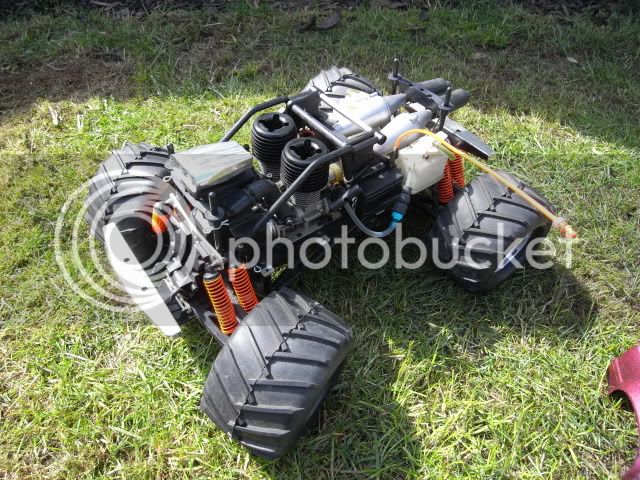 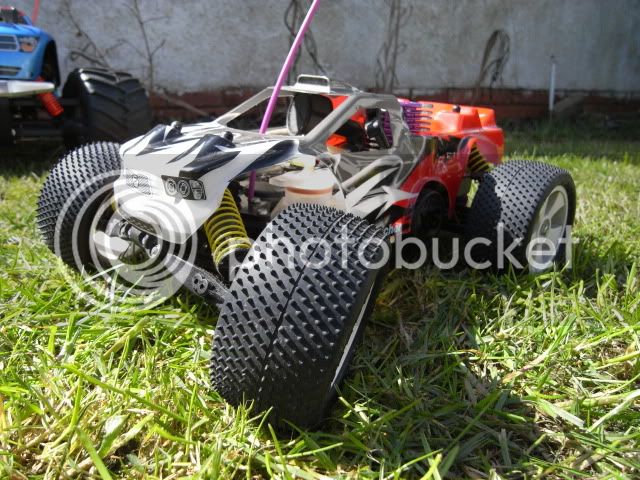 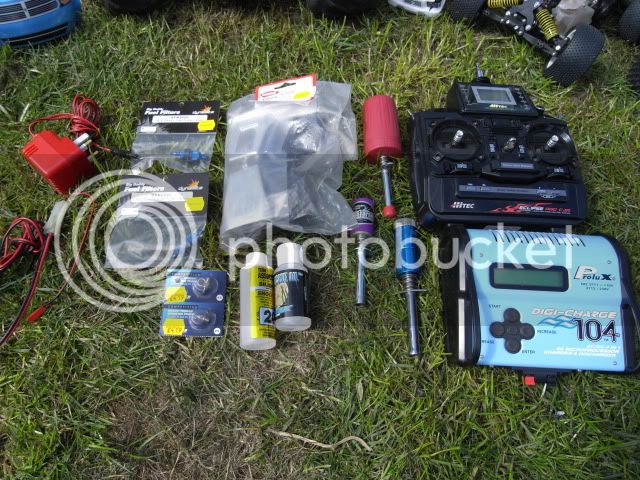 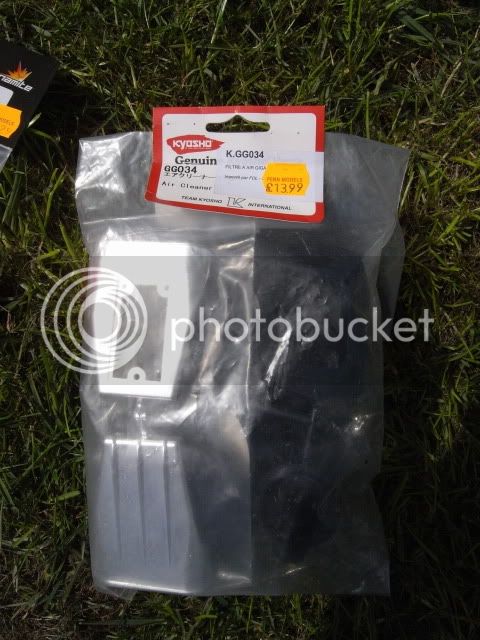 The spare filter kit.​
As you can see there's a few quids worth of kit here & I'm not in any rush to sell. The price is £450 for the lot or any sensible offer considered.