Can't you get a remote for the headunit? Or are you wanting to keep the display handy as well?

nah theres no remote avalible for the unit. wanted to keep the controls handy so can have got the option of the radio as well as full volume control

crud turns out the CF/sata adaptor ive got wont allow me to boot of it.
going to have to look for another 1.

sine sandisk started producing Solid State drives theyve modified the CF cards so they can be booted from, 2 many people were buying the 4/8/16 gb cards and using an adaptor rather than spending more than double for the SSD.
have ordered another cheap brand one to see if its any better, if not then ill have 2 4gb cards for sale

ok ater getting the second card up and running it acctually slower belive it or not.
it wouldnt take my image ether which meant doing a install onto the card (not that good)

33 seconds from cold boot running as admin,
21 seconds hibernate (10 seconds of this is the bios, looking at seeing if theres updtes avalible as theres been alot of complaints about the "fast post".

just need to copy the audio across then its ready to go in the car when ive got it sorted out.

Interesting results. I wonder why it is slower.

ok just a short update.
new image didnt work on the CF card so sticking with the Hard disc
New image has everything i need on it - cut down xp, mappoint, frontend, codecs, minlogon installed.
according to bootvis it does a cold boot in 14 seconds (excluding bois and post times) cant get a proper time for hibernation as it comes up with an error in bootvis when it awakens.
icon sizes and windows sizes have been made a lot bigger so that they are touch friendly

in the car - holes drilled in the boot and nutserts fitted, ready for the 4 capscrews to hold it to the back seat.
KCA lead for the AUX in has arrived
and got a 6" iso extension lead whrich has been extended up to around 2 mtrs ( headunits going in the glovebox at the min with the idea of fitting it to the storage box in the back seats if it fits and if i can get a spare faceplate ) Looking at doing that this week if i get a chance and refit the storage tray in its place. Baically so its a case of removing the trim and radio cage and fitting in the new one

From
Alone in the dark.

Thats sweet buddy. I can't wait for the pics when it's in buddy...

IT LIVES.​
had it in the car earlier today and it fired up fine mo issues at all, shutdown controller works as well.
the only issue i had was the GPS not working. mappoint comes up with a message box about a license issue, think this might be because of running under the system account (this is what minlogon does) as i had issues when i tried to install some of the software under this account. going to revert back to the admin account and see if it runs without an issue as it worked before activating minlogon

sorry didnt have my phone with me at the time so coundnt take any pics. but will get some when its installed, hopefully will be in next week if i get a chance just trying to work out where all the screws are for the 8 or so panels that need to be removed.
also need to take a stanley to the new radio cage as its been fitted for the older dial controls rather than the climatronic ones and is a very tight fit at the minute

Any pics yet PG?

no as i took it back in the house to sort out the gps problem (required a proper keyboard to enter safe mode).
hopefully fit it in properly next week just waiting on the USB extension cables as these were the only ones i forgot to order.
screen wasnt fitted but sat in the passengers seat.
really the only reason it was in the car was to double check all my cables worked and the shutdown controller worked ok with the ignition
A

yeah i did think about leaving a netbook in the car then done some research on it found out how easy it was to build one in,
not bothering with the broadband as im using it mainly for music videos and gps, also have vagcom installed for faultcode reading and monitoring.

hard a moment of inspiration last night at work (it was really slow).
rather than fit it permanently into the boot i was thinking about how to fit the gauges to where the ashtray is currently. and then remembered the badger had covered some of his stuff in that thin carbon fibre.

basically remove the parcel shelf, and take a fiberglass copy of it.
fit a dummy computer, wooden box slightly bigger in dimensions than the real one, and a dummy amp, done the same way, on top of it.
stretch some fleece over the top and make another copy over the top of it. basically the idea is to create a storage area within the parcel shelf for it and myamp. obviously id need to put some fans or something in to aid cooling adn look at covering with that carbon fiber badger used for 2 reasons.


in other words the only things that i will have in the boot will be the sub.

carputer will still be installed in the boot until i get everything worked out.

ok was hoping to get the carputer in the car this afternoon, thats been ditched.the old dears needed to borrow it, so shes had it from half 8 this morning.

Right started this morning nice and early, took the wife into work for roughly half 7 and was back in lockerbie for around 8 ish. quick nip home to pick up the tools and away down to the parents.

ok there was alot more panels than i originally thought to be removed so took around an hour to remove all but one as stupidly didnt think id need spanners to remove the armrest.
so after an our i had something like this 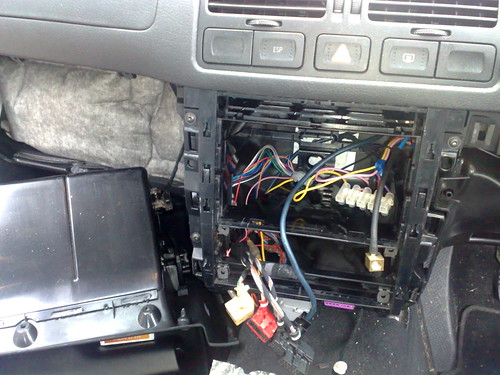 the radio cage itself took another 20 mins to remove, didnt realise there was soooo many screws to remove including another trim panel.
The terminal blocks you can see in the pic are for the gauges as didnt want to completely remove the wiring but didnt want to leave any chance of a short on the line.


ITS IN AND WORKING 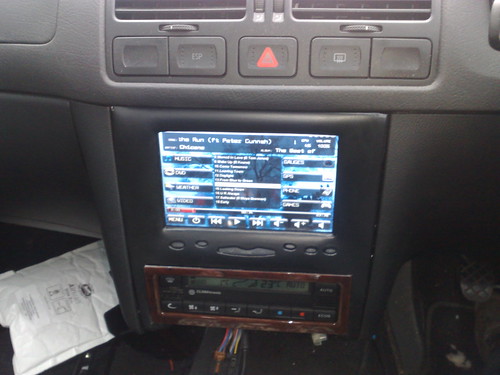 ok its working fin, however i was running out of time ( forgot the wife was on a half day and had to pick her up at half 12) so trying to get the trim panels back on became rushed.
the glove box isnt fitting properly as the base needs to go back around an inch, doesnt look so bad in the pic as theres a screw holding it to the radio cage.
but its hard to open just now 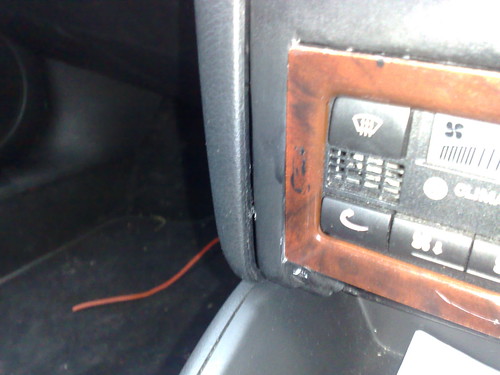 and because i couldnt remove the armrest to get under the carpet to the back seats the wirings sitting onto of the carpet just now. 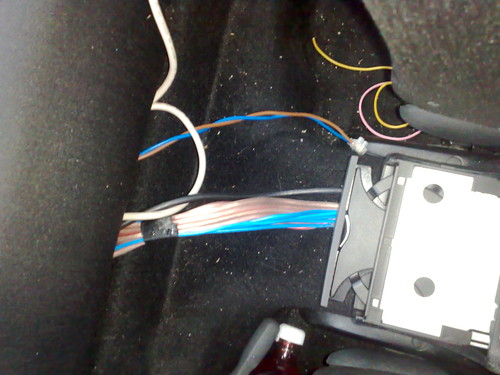 hope if i get a chance tomorrow before going to work to get these small issues sorted.
what i wont be getting fixed is the boot as theres currently wiring everywhere as didnt have the fuse holder with me or the distribution block so theres 4AWG wire with the thinner live wire wrapped round it and taped up, this will be done next Monday when ive got a lot more time

Looks nice. What about doing a step by step guide when its finished. Im sure with hindsite you could cut a few corners.

the only place i could have cut corners was when i fitted the bezel to the radio cage. i used way too much filler to make it smooth, looking back i could have got away with using so much less. And wouldnt have had to remove the cup holders from the top. this would have made the smoothing and painting much easier as well
apart from that there was only buying the computer ready made, but at nearly £300 for something that has less than half of what ive got, and no screen, doesnt make much sense especially as i build my whole system for less than that screen included.

a guide wouldnt be much good as alot of people arnt willing to play around and build a small computer system. but if anybody wants help im more than willing to give them a hand with it
Last edited: 13 February 2009

also my GPS reciver arrived this morning which now means i dont have to switch on the old bluetooth one and wait for it to connect, seems to be working in well and catches a signal pretty quickly

Great work. I missed this post! Its so good to see the final thing though.

still got little issues with it.
had to revert right back to the full SP3 install rather than the cut down version i had as couldnt get the text to speech component to work - meant i had no audio guidance when driving. not much difference with boot times after running bootvis on it.

also changing some of the coding for some of the screens on the road runner skin as they dont work with my version of map point ( europe version muct use different keys than the us version ). even looking at making my own screens to encompass vagcom. rather than it opening separately

key on , 2-3 seconds for the HU to waken up fully and apply power to the remote ( prevent amplifier pop )
5 seconds after the remote becomes live it powers up
about 10 seconds later i have a sound like alternator whine for a second. then music
D

It looks nice, but for storage sake would you have considered getting a laptop and taking the screen off and using the rgb out, to connect it to the new screen you got.

not really the case itself is only slightly thicker than a laptop. and for me to have bought a laptop with similar specs as this would have cost a nice bit compared to what i paid to build this. and wheres the fun in that
i did look at a laptop right at the beginning but nah it could also have been stolen easier and harder to power properly and hibernate

theres been a few changes since them. the new hard disc is in and new ram. since them its never crashed once under normal running - the only time it has crashed on me was something hitting into it when i was testing the new brakes